We are a few days away from the summer solstice, and it is kind of the best time of the year at the farm. (Aside from when we can start taking tons of tomatoes home.) Everything is blooming and fruiting, and it hasn’t been too hot yet, so only the most tender greens have bolted and been pulled up.We replaced most of them with three rows of bush beans. There are only a few signs of pests, so we are mostly watering and weeding and awaiting those summer harvests. 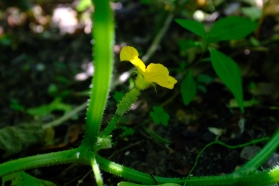 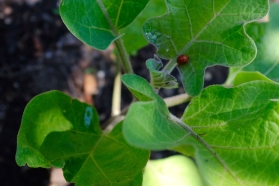 We are also playing a new game we’re calling “Spot the mullein.” Mullein is a member of the snapdragon family that is a biennial and flowers in its second year. We’ve never planted it (that anyone present today could recall), but it has popped up in four different places around the farm. It has many medicinal uses, the leaves are good for the lungs and respiratory issues in general, and oil from the flowers is traditionally used for ear infections. Ours are just starting to bloom, and we hope it will seed itself again.

This site uses Akismet to reduce spam. Learn how your comment data is processed.

A small piece of land (about 5,000 square feet) in Brooklyn dedicated to contributing to local, healthy alternatives to the industrial food system.